In this video, Vicki Dillard talks about the trial and verdict for Ahmaud Arbery.

According to cnn.com, the jury in the trial of three men for the death of Ahmed Arbery was made up of 11 White people and one Black person, but prosecutors told CNN that they felt that when the jury heard their arguments, they would make the decision to find all three guilty, which they did.

“I was hopeful based on the evidence that we presented in the case that we put forth that the jury would see the truth of what actually took place and bring justice for the Arbery family,” Cobb County senior assistant district attorney Linda Dunikoski said. “After we picked the jury, we looked at them and realized that we had very, very smart, very intelligent, honest jurors who were going to do their job which is to seek the truth. And so, we felt that putting up our case, it doesn't matter whether they were black or white, that putting up our case that this jury would hear the truth, they would see the evidence and that they would do the right thing and come back with the correct verdict which we felt they did today.”
One main goal for prosecutors Paul Camarillo, Cobb County senior assistant district attorney, said was to simply show that the defendant’s claim of self-defense, simply wasn’t a viable argument.

“We had to show that it did not apply in this case and if they could not get past that hurdle, they never could get to self-defense,” Camarillo said.

“I think the comments were unnecessary and they were low. and I just feel bad that Ahmad's mom dad and had to sit there and listen to all of those things,” Ollivierre said.

Dunikoski said defense attorney Kevin Gough’s comments about Black pastors-- though made without the jury present — was strategic.

“Mr. Gough is a very, very good attorney, and he purposefully and intentionally and strategically, I believe, did what did he in an effort to attempt to insert potentially some error into the case in case he lost the case and it went up on appeal,” she said

The attorney for William "Roddie" Bryan Jr. said he plans to appeal after his client was convicted in the murder of Ahmaud Arbery.

"Anybody in that position would be disappointed, would be hurt, would be shocked," said Kevin Gough, Bryan's defense attorney, after he was convicted of murder and other charges in the death of Arbery.
"Here he is, he does everything he's supposed to do, he's fully cooperating, he's done everything that he can and now he's looking at spending the rest of his life in prison," the attorney continued as he spoke to members of the media Wednesday afternoon.

Travis McMichael, who shot Arbery, and his father, Gregory McMichael, were also found guilty of murder and other charges. The three defendants are White, Arbery was Black.

Gough said he planned to appeal the decision regarding his client, noting, "We believe the appellate courts will reverse this conviction."

Gough was doubtful about the possibility of parole for Bryan.

"At his age, 25 years before parole eligibility? I don't think parole is even something he's going to be worrying about right now," Gough said.

BREAKING: Verdict in Ahmaud Arbery Case Has Been Determined

Copyright Disclaimer Under Section 107 of the Copyright Act 1976, allowance is made for "fair use" for purposes such as criticism, comment, news reporting, teaching, scholarship, and research. Fair use is a use permitted by copyright statute that might otherwise be infringing. 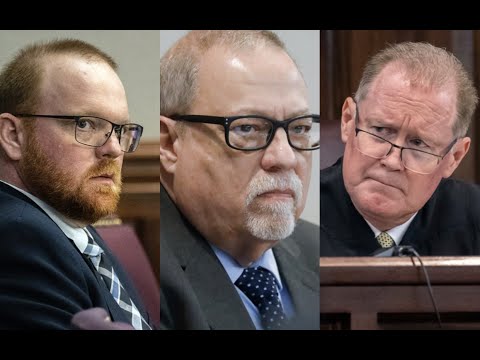